The Future of Paraglider Design -100+ Cells

on December 27, 2016
Three new gliders from different manufacturers have given us a big clue as to what the next big wave of innovation in paraglider design may well turn out to be.

Many pilots may agree that the Sharknose, originally patented by Ozone after it appeared on the R10 open class glider in about 2010, was the last major innovation in paraglider design. Ozone in a admirable move, did not licence the sharknose technology to other manufacturers. Instead, they released it freely, leading to rapid variations. The trickle down from open class to the gliders that mere mortals fly was rapid, and now even low end ENB gliders typically use some variation of the sharknose design.


The Journey to 100 Cell Paragliders

For years, paragliders cell counts have slowly increased. Like many innovations in paraglider design, high cell counts first turned up competition gliders. In order to squeeze as much performance out of the sail, it needs to be as smooth as possible. The air pressure that holds the wing shape create a billowing effect in the fabric between each cell, which creates many small areas of turbluence across the surface of the wing.

Once notable exception to the trend has been Bruce Goldsmith with his 'Cord cut billow' design for the leading edge. This is marketing jargon for a seam that goes diagonally above the cell opening. This in theory creates the opportunity to not increase the number of cells while still gaining some advantages of a cleaner profile.

Other innovations have been trailing edge mini ribs, which clean up the billowing of the trailing edge and keep it flatter, and even internal mid ribs on the leading edge.

The most successful competition glider today, the Ozone Enzo 2 broke the 100 cell barrier with 101 cells. It's close competitor the Gin Boomerang 10 has just a few less at 96 cells. With the Enzo 2's huge 13.4 m flat span, this means the average cell width 13cm.

Nova was the first to take the plunge and cram 99 cells onto an EN-B glider with an corresponding aspect ratio. The Nova Phantom has an aspect ratio of 5.19 and a flat span in the ML size of 12.9 meters, making the average cell with 12cm, even smaller than the Enzo.

As a comparison, my current Delta 2 with it's higher aspect ratio and 62 cells, has an average cell width of 20cm.

Here is Nova's explanation from the Nova Phantom website, which very succinctly sums up why I suspect an increase in cell count is likely to be one of the most compelling directions paraglider design will take in the next five years. The highlighting was added by me for emphasis.

Are wings with many cells difficult to fly?
No, this is a misguided belief. A higher number of cells increases glider weight, but by using lightweight materials and structurally analysed and optimised slots, we could compensate for this additional weight.
But performance wings with many cells are more challenging to fly than EN A gliders with few cells.
Correct, but this is due to the higher aspect ratio, rather than the increased number of cells. There is no direct correlation between the number of cells and how demanding a wing is to fly.
How does a large number of cells increase performance?
The more cells, the smoother the wing – which means less drag. A large number of cells also provides ultimate stability. This helps maintain performance even in turbulent air.
In the photo below, you can see how the high cell count on the Nova Phantom almost completely removes the classic mental picture we've had for years of paragliders - that of a bubbly, billowy wing. The shape looks incredibly clean, also cleverly highlighted by the narrow contrasting strips of color that highlight the clean sharp shape of the upper size of the leading edge, and the lack of billowing between cells both on the leading and trailing edges.. 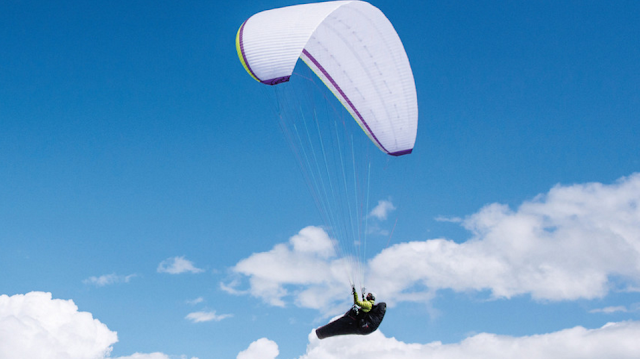 The next photo shows another brand new glider, Ozone's Zeno. This is a EN-D 2 liner with the super clean look of an Enzo. It has 78 cells on an aspect ratio of 6.9 and a span of 12.9 meters, giving the average cell width of 17cm.  This is only a slightly higher aspect ratio than the Trango XC2, one of the best sport class gliders available currently. The higher cell count gives is a smooth, slim appearance. According to Ziad Bassel, who publishes the most thoughtful and thorough paraglider reviews, this is the fastest EN-D wing available on the market today.

Notice the compression of the cells towards the trailing edge at the bottom of the picture. The wing tips of theses high aspect ratio gliders flex back and forth a lot and the high cell counts make this flexing even more visible.


Ozone Zeno
EN-D with 78 cells, but has the look of a high cell CCC glider
Photo: Ozone Website 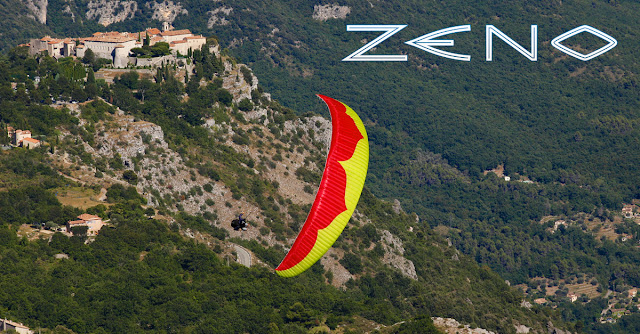 This photo of two Enzo 2s spiralling (or thermalling) together shows both the the high cell count and the extreme aspect ratio perfectly. On the glider with its top surface showing, the flexing of the lower wing tip is clearly visible. The braking on the inside wind does exaggerate the aspect ratio somewhat. 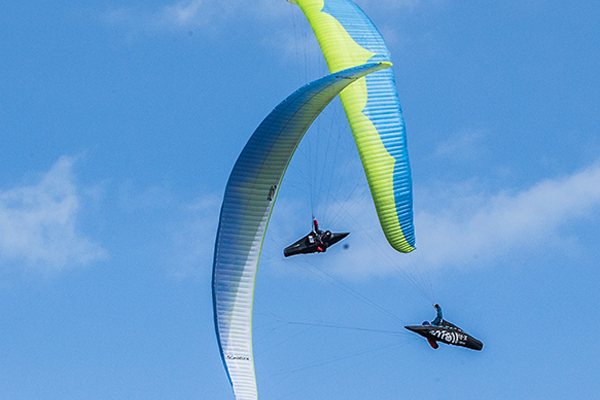 As I write this, the internet is abuzz with the last new high cell sensation. From one of paraglidings newest manufacturers, Triple Seven, comes the Checkmate prototype, which looks like it might have a cell count between 125 and 150. Apparently the Valic brother flew these to high results in a recent European competition. As the gliders are prototypes, they were not allowed to be in the official results. At a guess it looks like these cells are perhaps only 10cm or less. 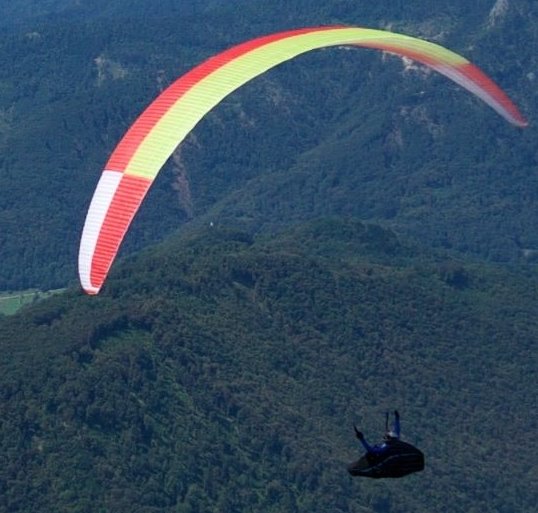 In recent years, a number of highly experienced pilots that previously flew competition gliders noticeably stepped down to Sport class gliders. The glider of choice seemed to have been the UP Trango XC2 which was rated as EN-C, but which most people seemed to consider really performed (and required the piloting skills) of an EN-D.

Recently at the 2016 Rat Race I asked Mark Hardman, a well know instructor in New Zealand, whether people fly competition class gliders in New Zealand. He answered that basically no one does. This is because in New Zealand conditions, pilots typically fly close to very rugged mountains at quite low altitudes and sometimes windy conditions. No one really wants to be on a competition glider in those situations, due to the extreme behaviour if collapses do occur.

Where I fly in southern California, despite an abundance of flying site and flyable days, there are only a handful of pilots on CCC wings . With our flying mix of dynamic terrain soaring, thermalling, frequent low saves from baking hot air in rugged terrain, and razor sharp thermals from large boulder strewn hillsides, having a high aspect wing is not the preferred choice.


Record flights around the world still require the best gliders, a look at the gliders flown in recent records in the Brazilian flatlands confirms that. But there are very few pilots that have the endurance to fly 11 hrs and attempt to break 500km. In the flatland flying situation, apart from scary looking high wind launches, those pilots rarely get less than 1000ft over ground for the entire flight.

Pilots doing large triangles in the European alps have gradually decreased the class of glider they fly. Those flights typically are 6-8 hours, with a huge variety of flying conditions, from strong lee side thermals, ridge soaring, and crossing areas of strong valley winds. There too, outside of competition, stability and comfort for long flights is becoming the priority for the glider of choice.

The areas where ultra high aspect ratio wings really excel are flat out racing at top level, flying into strong wind (which XC pilots really try and avoid, but is inevitable in racing), and flat out distance racing such as necessary to break new records. For all other types of paragliding, aspect ratio seems to come at a high cost of increased pilot fatigue and stress for the extra performance it provides.

The really good news is the high cell gliders at the EN-B and EN-C level will in general increase performance for the same aspect ratio.  This may may make lower class gliders more attractive to XC pilots who still need enough glide and performance to feel they can confidently make bold XC decisions such as a committing transition between thermals,  without the worry of arriving at tree top height with the need to scratch in a unknown and potentially dangerous location.

They will also likely appreciate not having to be constantly actively flying a twitchy, high aspect ratio wing in order to still progress in their flying goals and challenges. Overall, the trend of not having to step up to a paraglider that is more difficult to fly in order to keep progressing in the sport will be a great thing.  In 2016, almost every San Diego site record was broken by a relatively new pilot flying a Delta 2.  It would be almost unthinkable to have flown a EN-D or CCC wing on many of the days those flights were made, but the Delta 2 has the mix to glide, thermalling, collapse resistance and solidity on speedbar to give pilots confidence to progress as fast as their skill development and time to fly takes them.  The arrival of a bunch of high cell count EN-B or EN-C glider could make the learning curve to more challenging flights or Sport Class competition flying both safer and more fun for many pilots.

1. High cell count gliders are here to stay. The increase in complexity will be compensated for by more sophisticated manufacturing and use of lightweight materials for the internal structure
2. As high cell count gliders move down the glider classes similar to the sharknose did, we will see better gliders at EN-D, EN-C and EN-B level. Beginner and school gliders are likely to stay basic and probably much less affected by this trend, as beginners cannot really take advantage of the performance advantages.
3.  Chances are very high that if you are an intermediate or sport class pilot, your next paraglider will have more cells than your last one, even if you don't move up a glider class or increase aspect ratio. 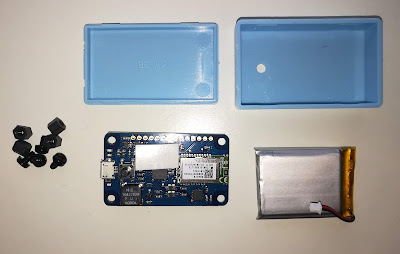 Setting up a BlueFly Vario with XC Track

Receiving the package My BlueFly vario arrived from Australia in 16 days after ordering. It was packed in a small bubble wrap envelope labeled Variometer parts. This is probably a strategy to avoid customs on finished products. The whole approach that BlueFly uses is clearly meant to keep the costs down.

Assembly Assembly took about 15 minutes, following the assembly instructions on the BlueFly website. It feels a little weird to be assembling your own electronic product, but it is so simple that it shouldn't present any difficulty.  If you want to attach a lanyard, you do need a small drill to create too small holes in the casing.


Contents of the package were two part casing, screws, circuit board and battery


Carefully insert the circuit board into the case. A folded up piece of paper stops it moving around

The last step is to plug in the battery and close the case. It's a snug fit. The manual doe…

This information is modified from instructions provided by Jugdeep Agarwaal who runs the NorCal XCLeague and distributes Flymaster instruments in the USA.

Most of the other categories are unlikely to shown on the charts are airspaces, so be aware that they might not show up on your instrument. If in doubt check any NOTAMS for restrictions.

What I selected for my airspace includes: Class A, B, C, D, prohibited, restricted, danger, CTR, wave window, glider prohibited and other. Basically all of them.

Please note that the http://www.maddyhome.com/ctr/ website seems to be no longer active. See the post Creating an Airspace File to create one manually.